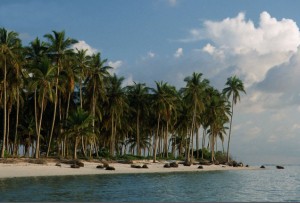 Beaches are one of the marvels of natural wonders which are known for their perfect juxtaposition of dazzling white sands and azure blue sea. This romantic combination makes it a high flying destination where one can stimulate their sense of imagination. The amalgamated beauty of sun, sand and sea fringed by coconut trees make beaches a romantic destination where one can get relief from their weary thoughts and life.

Three day weekend holidays provided me an opportunity to spend a memorable holiday at beachside, as I was in Thiruvananthapuram Capital City of Kerala for my official work. This plan was in my mind so I wrapped up my work by Thursday and extended my guest house booking for two more days.

On early Friday morning I went to Kovalam Beach which is located around 13 km downtown from this place. The name of Kovalam Beach conjures up the images of boundless blue waters of the Arabian Sea and miles of white sands washed away by the surf along with stalwart palms trees and the rocky terrains. It is one of the most famous and most sought after Beach destinations of India which is visited by large number of tourists from various parts of the globe. The ambiance of blue sea, silvery sands and unending rows of palm makes it an enchanting destination and popular beach hangout in India.

When I reached near the beach I felt the magical charm of this place which I had only read in the magazines till now. The charming spell of this place is too overwhelming to be quoted in words. The bewitching feature of this place is enhanced by the rocky terrain that separates this crescent shaped beach into three parts. I took coconut water to quench my thirst and went atop the rock to have a bird’s eye view of the entire surroundings.

The views of entire beach at one go mesmerized me and helped me to identify the place where I can spend my maximum time in solitude, watching the natural panorama of rising and falling sea waves.

After enjoying my binocular vision from the cliff I went near the sea to enjoy its coming and going blue waves lapping the shore. For the first time in my life I stepped in the sea and the joy that I felt is beyond description. I was standing and sea waves lapped my feet which enthralled me and made me laugh as I felt as if someone is tickling me.

Every time I had to maintain my balance because of the thrust of sea waves and loose sand beneath my legs. Despite of being completely wet I enjoyed myself at my best. After spending an hour at this place I went to the nearby sea-restaurant to taste lip smacking Kerala Sea food for my lunch. The lunch was really good as it was made from the fresh sea fish and original spices from the backyard of the restaurant.

This internationally renowned bow shaped beach is made up of three beaches which are separated from each other by a rocky terrain. The largest beach is known as Light House Beach because of its 35 meter high lighthouse, situated on Kurumkal hillock. The second one is Hawah Beach. It was the first topless beach in India but now topless bathing has been banned here. And the third is Samudra Beach which is famous among the local fishermen of Kovalam as it is a center for fishing.

The birds chirping woke me from my sleep, I saw the time it was 5 p.m. I slept for more than 4 hours, but it was one of the pleasant experiences of sleeping in the lap of nature. Even after I was awake I stayed here for more than an hour watching sea. I was captivated by the beauty of scenic ambiances which prompted several thoughts in my mind based on various subjects. I analyzed some of my thoughts which calmed down my mental anxiety because I pressed down the right issue with reasonable arguments. It is because of some issues related to my personal life I stayed here for two more days even after completing my official work. I got the answers of those issues which I was looking for a long time.

After unleashing my mental burden I walked down to enjoy the evening beauty of this place. The taste of lunch was so tempting that I headed to the same restaurant to fill my stomach. This time I took fried Crab with chilled beer and enjoyed the delighted evening from the rooftop of the restaurant.

As the night fell the beauty of darkness had its own romantic panorama to reveal. I strolled around the beach watching star studded sky flanked over the vastness of Arabian Sea. The whimsical sound of sea waves molded with sea breeze hypnotized me like a black magic. I rested on the seaside till midnight and then I headed for my guest house.

http://blog.capertravelindia.com/kovalam-beach-perfect-destination-to-discover-exotic-charm-of-nature.html2010-04-20T07:54:56+05:30JagjitBeachesIndia TourSouth India ToursBeach destinations of India,beach in India,Kovalam Beach,kovalam beaches,Kovalam Tourism,Kovalam Travel Guide,Kovalam Travels,Kurumkal hillock
Kovalam Beach Kerala Beaches are one of the marvels of natural wonders which are known for their perfect juxtaposition of dazzling white sands and azure blue sea. This romantic combination makes it a high flying destination where one can stimulate their sense of imagination. The amalgamated beauty...
Jagjit Kadianjagjit@capertravelindia.comAuthorIndia Travel Tourism
Bookmark In Your Favourite List ! 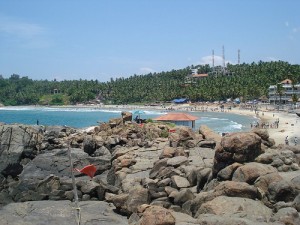