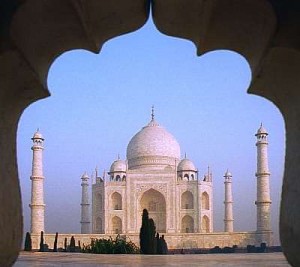 Love is a strong positive emotion of regard and affection which holds two souls together forever. It is the most fascinating feeling of a human heart which is expressed in various forms. Some express it with poems, some with songs, and some with gifts or surprises. But none have ever dared to immortalize their love, as the Mughal Emperor Shah Jahan did by constructing Taj Mahal.

Taj Mahal is the immortal tribute to love which was built in the 17th century by Shahjahan – the fifth Mughal emperor, as the mausoleum of his beloved Queen Mumtaz Mahal. The romantic aura of this 350 year old white marble edifice is still felt which makes it a romantic destination of the world. The everlasting charm of  Taj makes it  a popular world heritage  on the earth.

Last weekend I visited this symbol of Love with my Uncle and Aunty who came to India from New York. It was their wish that I accompany them during their Agra Visit. It was my third visit to this place and in each visit I learnt something new. Along with my uncle, aunty and their two friends I boarded Shatabdi Express from New Delhi in the morning and reached Agra by 08:15 am.

Taj Mahal is a synonymous of love and romance which is located on the bank of River Yamuna. It is set among the serene ambiance of a well-laid-out garden with the backdrop of Yamuna River flowing silently. The beauty of this monument is heart throbbing which makes it incomparable with any other monument in the world.

This incredible manmade construction is known for its architectural supremacy. Recognized for its symmetrical construction,it is raised on platform and surrounded by four minarets. Inside the Taj, the delicate mosaic work and intricate decoration with inlaid design of flowers and calligraphy engrossed me completely.

For me this is the finest example of Mughal architecture which is known for its construction and decoration pattern of Turkish, Persian, Indian, and Islamic styles. I was highly impressed by the mosaic design which covers the entire surface of this building.

Another most captivating aspect of this place is a pool that reflects the image of Taj Mahal. The inverted reflection of Taj in the pool is beyond description. Sometimes this stillness was disturbed by the ripples but its calmness was soon restored. As it happened during the Mughal Reign, when their empire  lost its stability for sometime but soon their legacy was restored and flourished for centuries.

After having lip smacking lunch I took my Uncle, Aunty  and their friends for shopping. During shopping they purchased several things as a souvenir of this place. After shopping we returned to the railway station, where we boarded Shatabdi Express and reached Delhi around 10:30 pm.