Hyderabad City of Love and joy 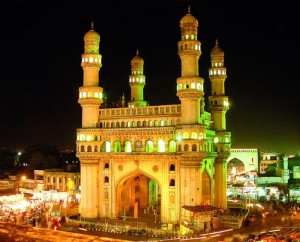 The city of smiles, of lights, of a thousand faces, endearingly called the Pearl City; Hyderabad- the capital of Andhra Pradesh offers a variety of tourist attraction. Set up in 1591, the city is one of the major metropolitan cities of the country and is famous for its IT industry, Biopharmaceutical and Telugu film industry. Starting from historical places of visit to the beauty of nature, the city has all. The fast development of the city, along with the development of adjoining city Secunderabad and adjacent municipalities has resulted in the creation of a huge and densely populated metropolitan region. With my keen interest in this cultural rich heritage city, I decided for a sojourn to Hyderabad tourism.

Charminar: Called roughly as Four Towers, it is one of the most important monuments of Hyderabad. The Charminar was built in 1591 by Mohammed Quli Qutub Shah. Legend says that sultan built it to honor a promise to Allah when he prayed for an end to a plague that ravaged the new city. The building got its name from its four minarets, which were possibly meant to honor the first four caliphs of Islam. Islamic style define the arches, minarets and domes to make a unified whole. At the western end of the Charminar’s roof is a mosque–the oldest in Hyderabad and atop the building are 45 prayer spaces.

Golconda Fort: Built in the 13th century by the Kakatiya kings, the fort is located on the hill above 400 ft. It has 8 imposing gateways and is buttressed with 87 bastions rising to a height of 15 to 18 m. one of its greatest marvels is its acoustic effects- one handclap at a certain point below the entrance dome can be heard at the highest point of the pavilion almost a kilometer away. This was said to be used for warning the royals in case of an attack. The Golconda Fort used to have a vault where once the famous Kohinoor and Hope diamonds were stored along with other diamonds.

Ramoji Film City: Is the world’s largest integrated film studio complex over 2000 acres and has found its way into the Guinness book of world records. The Ramoji Film City is a spooky haunted place. It is believed to be built on a war ground of the Nizam sultans therefore haunted by the ghosts of the dead soldiers.

Jama Masjid: It is the oldest mosque in Hyderabad built by Quli Qutub Shah in 1857. Jama Masjid encloses an ancient Turkish bath in its premises. Every day during the prayer time and especially during the festive seasons, the Jama Masjid is crowded by numerous Muslims who come here and offer their prayers.