Slight traces of sleep lurked in my eyes. I yawned.

The copper-red sky was shedding its hue, embracing the turmeric yellow sunshine. It was cold like mornings after foggy nights in Jaipur usually are. Taking a deep breath of fresh air, I stood still.

At a distant was Amer Fort, sparkling enigmatically. It is lauded as one of the most important tourist destinations in Jaipur. Once you watch it, as it truly is, you wouldn’t wonder why. Rather than being enamoured by its magnificence, I craved to spot the cracks, the ruins within ramparts, broken bricks, bamboozling corridors and surviving courtyards.

Standing next to the Maota Lake, the flutter of kits of pigeons, rising from the royal bluish tinge, was silently setting the scene for the spectacle.

For a split second, Amber Fort tour felt like a mise-en-scène in Rajasthan. I could see foreigners waiting for their turn to ride the caparisoned elephants, through the cobbled paths. Hundreds of elephants were lined up, as if a parade would take place. All of them tamed and domesticated.

Since I was looking for a story, or perhaps an iota of past, creeping somewhere, discovering the fort was a must for me. Even now, it still intrigues me how one space—be it a monument, fort or palace—would mean different things to different people. Depending on ‘not where they are’ but rather ‘where they come from.’

With all these thoughts in my mind, I braced up for Amber Fort tourism. 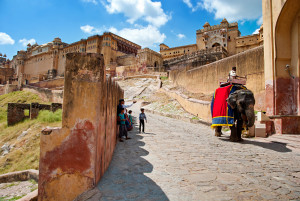 Anyway, with my baby steps inside the fort, I could spot that it was constructed with red sandstone and marble finishing.

The aesthetic ambience of the fort, dotted with artistic Hindu styles of architecture was quite appealing.

For years, it had remained the abode of royal Rajput Maharajas. It was named after Lord Amba, who in colloquial manner, is considered the protector of the world. Worshipped mainly by the tribal Meena members, the goddess was also called as ‘Gatta Rani’.

As I was exploring its history, in tid-bits and definitely in a helter-skelter manner, I was drawn with the fact that most of the monuments constructed by Meenas could not be preserved. Apart from this historical fort-cum-town. Eventually adding to its importance. 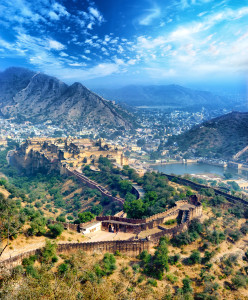 As I explored every little bit of it, all I could feel was how hauntingly beautiful architecture itself can be.

At times, the little details that I could spot surprised me too. For that singular moment, I was a part of the story of Amber Fort in Rajasthan, with my little steps heading its way.

And slowly when it ended, it felt like a journey within time, like some kind of time travel, that I was meant to take. And had taken. Finally. 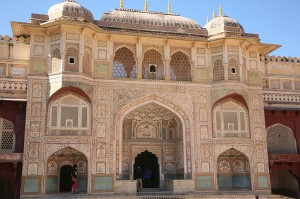