I love the wind touching my face. Like a gentle caress. Invisible yet ‘too full.’ Felt yet never explained. Not like a hurricane. But yes, thunderous. Like a lightning.

So, quite naturally, the name of ‘Hawa Mahal’ (Palace of Wind) simply stuck in my mind. Like a chewing gum. Try scratching it. See if it peels off. Well, it does not. 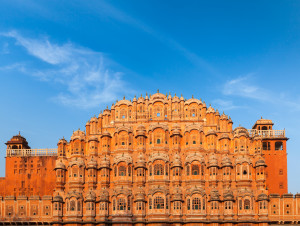 For quite few years, it piled on in my life. I kept on procrastinating. We all do. Don’t we?

And then one day, I stood in front of Hawa Mahal in Jaipur in Rajasthan, perhaps falling in love with it. Essentially, this high-screen wall, constructed in pink and red sandstone is quite majestic.

It literally shines. Yes, it sparkles.

Hawa Mahal was built by Maharaja Sawai Pratap Singh in 1799. Along with its design, its history is replete with architectural, artistic and visionary details.

Drooling, I don’t do. But yes, Hawa Mahal facts serve as my fodder. Anyway.

Arming myself with facts—with their own longevity, depending on the synapses of my brain—is important.

How can I not know, why a particular monument was created? Why does it still survive? How does it? Yes, it rattles my brain. Like a vice, at times.

The Hawa Mahal design includes 953 small windows, locally called as ‘Jharokhas’. Their intricate lattice-work strikes you. Its exterior—looks like a honeycomb in appearance—was designed in the shape of crown of Hindu Lord Krishna.

But isn’t it weird? Just stop and ask yourself. 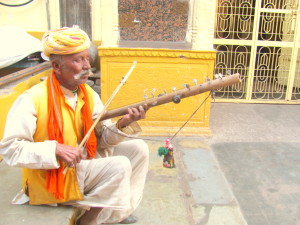 The ‘Jharokhas’ originally served dual purpose. The lattice-work allowed cool air to enter, thereby endowing ‘Hawa Mahal’ its name. In addition, it aided royal women to have a look at the street processions, without being noticed. After all, the strict purdah (veil) system was practiced in the Rajput culture, quite dogmatically.

Standing there, I wondered how many stories were invisibly buried behind each window. Of pain, longing, separation or even happiness. Especially when the kings used to return home safely, after valiantly fighting a battle in a foreign land.

My trance was broken by the subtle, soft music coming from nearby. An old man was too engrossed in playing ‘Raavan Hatha’. This string-musical instrument—an inseparable part of Rajasthani folk music—has been used for storytelling, from times immemorial.

Its 15 metallic pegs, running along its body, signify the 15 fingers of Raavan, the opponent of Lord Rama in Hindu epic of Ramayana. It also resembles a bowed violin, used in ancient times. It’s made of goat hide and coconut shell and still played in some parts of Sri Lanka, even today. 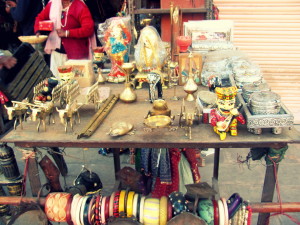 Historically, it used to be one of the first and foremost instruments mastered by the Royal Rajputs. Interestingly, a prominent author like Patrick Jered had excavated its history in his book ‘Finding the Demon’s Fiddle’.

After a while, I also spotted little shops around me. With shop-keepers setting up their indigenous commodities—bangles, antique pieces, silverware, typical Rajasthani dolls, etc. You can easily haggle for the price you want to pay.

There are several local markets, neatly located near to Hawa Mahal. Do not miss shopping at ‘Bapu Bazaar’, ‘Johri Bazaar’ and ‘Nehru Bazaar’. Especially, during night time.

The scintillating lights, adorning the Hawa Mahal would further leave you speechless. Enamoured.

And this time, the sparkling image of Hawa Mahal will stick in your mind. Forever.

Just it did in mine. Still does.

http://blog.capertravelindia.com/artistic-journey-into-hawa-mahal-in-jaipur.html2015-04-28T15:28:59+05:30Caper TravelHawa Mahalattractions in jaipur,hawa mahal history,hawa mahal in jaipur,hawa mahal sighseeing,hawa mahal tourism,places to visit in jaipur
I love the wind touching my face. Like a gentle caress. Invisible yet ‘too full.’ Felt yet never explained. Not like a hurricane. But yes, thunderous. Like a lightning. So, quite naturally, the name of ‘Hawa Mahal’ (Palace of Wind) simply stuck in my mind. Like a chewing gum....
Caper Travelmanish@caper.inAdministratorIndia Travel Tourism
Bookmark In Your Favourite List !